The following is an extract from the Brochure to celebrate 100 years of Calverton Cricket Club.

One Hundred Years Not Out at Calverton Cricket Club 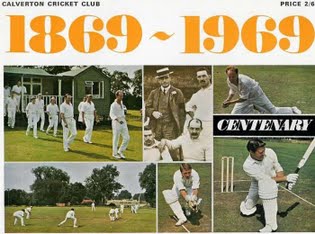 Because there is no documentary proof of the existence of a cricket club at Calverton before 1869, Calverton Cricket Club have chosen 1969 as their Centenary Year, although it is known with some certainty that a team existed as far back as 1850 and probably before 1840.

Cricket has always had a large following at Calverton, much more than any other team sport and even in times of difficulty matches were played on any field that could be found and practice carried out on the roadside with foot treadles of stocking frames for bats. This kind of enthusiasm has continued down the years.

The written records exist in the form of an old account and fixtures book, which shows that in 1869 the club had a membership of 20 people, each paying a subscription of a shilling a month.

Old men’s memories of stories their fathers told show that cricket matches were played at least 20 years before 1869. One old inhabitant claimed to have played for Calverton in 1860 and spoke of a celebrated match against Nuncargate for £5 a side in 1850. In those days players managed their own affairs, there being no committee and no official captain.

In 1879 players were so keen they played on ice at Salterford Dam on January 10, at a  time when the weather called for the item which appears on the expense sheet as “2 bottles of Whisky for match, 8s.”

Cricket, we know, is thirsty work at any time, so it is not surprising to find entries for this period “Ale for players, 2s. 6d” or “Ale for Committee, 2s. 3d.” along with such items as “mowing for three matches, Foster and Harrison 1s. 6d.” and “Rolling wicket 4d.”

Just before the 1890’s the club headquarters were at the Gleaner’s Inn and matches were held in an adjacent field. The Club had the name Calverton Foresters Cricket Club and was governed by eight simple but quaint rules:

1. That a captain be selected previous to each match.
2. Practice Monday nights and Saturdays.
3. Swearing on ground by members is strictly prohibited.
4. That every member taking part in a match obey the commands of the captain.
5. That no one be allowed to play on the ground unless they be members of the club.
6. That every member uses his influence against persons damaging fences, etc.
7. That every member shall have equal time in batting, bowling and fielding during time of practice.
8. That every member selected to play will be expected to comply or find a substitute.

Play usually began in April and matches were played until Calverton Feast (late October) if the weather permitted. Saturday was not then a widespread holiday and Monday was the usual day for chosen fixtures.

A period of difficulty was encountered when the club lost their ground in the 1890’s. By 1900 they had the use of the recreation ground behind the church and a wooden butcher’s shop served as the dressing room.

Conditions became more settled in 1910 when the ground known as the Rookery was provided by the generosity of Col. Frank Seely, who was President until his death in 1928 and who was followed in that office by his son, Major Jim Seely, who held it until his death in 1956. To ensure the club’s security Major Seely leased the ground to them for 99 years at a rent of 15s a year. Major Seely’s son James is now president of the club.

At the turn of the century it was usual for the home team to provide the new ball and for the winning side to retain it. For practically seven years the ball remained at Calverton, to be joined by others won in away matches.

One game the Calverton side did not win, however, was that played on August 31 1902 against a Notts County side which included the three Gunns – William, George and John, Arthur Shrewsbury, W. Shrewsbury, J. Hardstaff, G. Anthony, T. Wass, J.W. White, R.E. Hemmingway and J. Iremonger.

The match was for Isaac Harrison’s benefit and after bowling Calverton all out for 86, Notts went on to score 104 for 8. Isaac had played  for the county in 1901 and died at an early age after an illness. He was reputed to be a magnificent fielder. He was one of the Notts side to be skittled out for 13 runs by Yorkshire.

Calverton proved to be a great nursery of cricket, for many of the club’s members accepted professional engagements in towns and with schools. As many as 13 went out to take up cricketing jobs in one season. Among those recalled as going out as professionals are: J. Anthony, J.C. Hind, W.C. Hind, J. Stevenson, W. Smith, J. Taylor, M. Harrison, D. Binch, S. Binch, F. Binch, E. Binch, T. Lee, F. Watson, W.B. Morley, A. Worthington, H. Bardill, Herbert Hind and Horace Hind, who was also on the Notts ground staff before his career was interrupted by the war.

In 1937 a new pavilion was opened and to celebrate the occasion a match was arranged between sides chosen from home and various clubs. In this game A.W. Carr made probably what was the biggest hit ever seen on the ground. The shot almost defies description. It was not elegant as a cricket stroke but the rising ball on the off was slammed over points head to clear two hedges before landing two fields away.


1972 saw Calverton enter League cricket in the Notts Combination. A successful first season saw Calverton win the League & they also retained the title the following year. The Combination title was won once again in 1979  and the Combination K.O Cup was also won in 1981 and 1985. The Champion of Champions trophy was played for in 1973 and 1982.

1994 saw the Club erect a new brick built pavilion & bar, which was followed by an extension of a new score box and garage in 1996.
1998 saw the club host a benefit game for local lad Kevin Evans who brought a full Notts CCC side to Calverton.
The weather was perfect and a splendid evening was had by all.
1999 saw 2 artificial nets put in at the ground.
2002 saw Calverton enter league cricket on a Sunday in the Newark Alliance.
The Sunday side finished Runners up in Div 5 and were duly promoted.
2014 saw a further extension to the Pavilion thanks to a grant of £25,000 from the Olympic Legacy Fund courtesy of Nottinghamshire County Council. The tea room was extended, a new garage built and an electronic scoreboard installed. The ladies toilet was also upgraded to include a shower and changing area.
2015 saw the exterior of the pavilion receive a face-lift. A newly constructed viewing area/patio was built in readiness for the 2016 season.